Have you ever had something you've wanted to do for a long time but never had the time, or the money. Something that really could only been seen as an indulgence. Well for me, one of those things has been a train trip through the Rockies. We've all seen the ads for these trips but they are freaking expensive! Beyond the cost, its not a quick trip and with a family the costs can add up pretty quick.

Well, as I was looking over my travel schedule for this past spring, it included a trip to Edmonton and so on a whim I checked the Via Rail schedule and costs. Turned out an economy ticket was actually $20 less than flying home at the end of my business trip and I only had to stay in town one extra day. So I cashed in some points for the extra hotel stay and booked a train ticket instead of a plane ticket. Once I had my plans in place I let my sister know as I had promised my nephew I would take him a road trip one day if the timing was right and his parents were cool with it. They gave him the green light, I found a screaming deal on a flight and got it all booked.

Our adventure began on Friday night, after my conference was done, I grabbed a cab to the airport, picked up a rental car and found my nephew at baggage claim and headed to our hotel. Saturday was a day on the town and he & I covered a lot of ground. We started with breakfast at the Highlevel Diner where we each downed a massive Cinnamon bun. Then it was on to the Strathcona Farmers market and then the Conservatory to see what was left of the giant corpse flower. We then scoped out our route to the train station and grabbed lunch at the Burger's Priest. A stop at the Lego Store, MEC and finally the Bulk Barn for snacks for the train ride and we headed back to the hotel.

Sunday Morning we were up early, early, to get a cab to the train station for 6am. Of course we got there only to find the train was actually nearly 4 hours late. It was all good though, we waited an chatted and snacked. When the train rolled in we were ready to go!

We got on board, found some seats and headed to the dome car pretty much right away. The journey out of Edmonton and toward the foothills was wonderful. One of the things I like about rail travel is that you go through different parts of town, usually the older and more industrial parts. The tracks also don't usually follow the highway so you see a different view than you would from the car.

The journey up to and through the foothills was a nice easy ride through fields, past lakes and over rivers. Soon enough, the mountains came into view, and we were wowed until dark. We were so blessed to have a perfectly clear day for this trip and the delay in departure actually worked out well. We were scheduled to have a longer stop in Jasper around lunch time but with the delay we ended up just having a short station stop with enough time to hit tourist shop row and grab a snack. We ended up getting something dinner-ish from the snack bar when we got going again and just enjoyed the views. We stayed up in the dome car until dark which was somewhere before Blue River which meant we went through the entire Rockies portion of trip in daylight.

Sleep was a little difficult but better than an airplane. As we had economy tickets we just had reclining seats but the train wasn't full so we were able to each take two and spread out. My nephew is small enough he could curl up on two seat, I awkwardly shifted around through the night. At the first hints of daylight I was ready to get up and out of that seat. Here the delay worked in our favour because we hit daylight around Spence's Bridge, which meant we saw much of the lower Thompson and the Fraser Canyon, which we would have missed had we been on time.

Now the one thing about being an economy ticket holder, is that you are confined to the economy cars and you are only able to go to the dining car if there are any reservations left after the non-economy passengers have had their pick. When the breakfast call came however, there was room in the first time slot so I roused the boy from his slumber and we enjoyed a lovely breakfast watching the world go by.

The final hours, brought us closer and closer to home and more familiar sites. It was interesting however to wind through the Fraser Valley and into Vancouver on the train, again seeing things from an angle not seen from a car. We finally pulled into Pacific Central Station just after noon. A quick bite to eat while waiting for the bags to be unloaded and we hopped on the SkyTrain and then the bus to make our way home.

It was a wonderful trip, that I highly recommend doing at least once. The economy fare is pretty reasonable, though it comes at the cost of a good night's sleep. It is also important to make sure you pack snacks so you aren't completely dependent on the snack bar. It is also key to be flexible as schedules are more of a suggestion due to the priority of freight trains. This is certainly a trip I will be doing again given the chance.

Here are are a few pictures for your enjoyment! 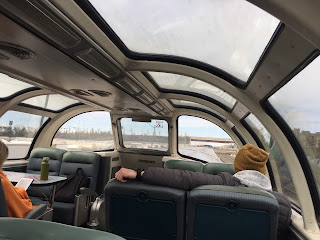 This was our view for most of the trip as we spent the majority of our time in the dome car. 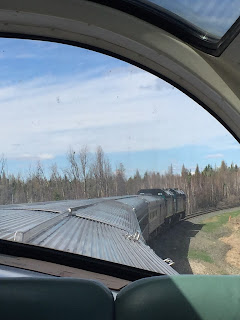 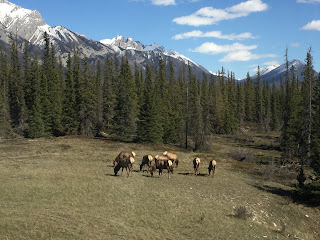 Lot's of wildlife, including at least 3 bears. 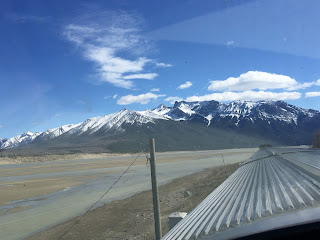 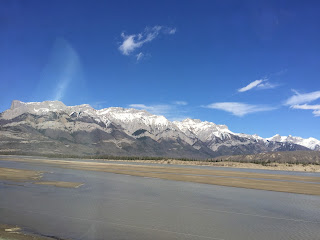 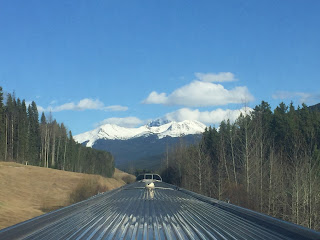 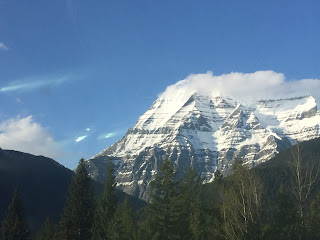 Mount Robson is a sight to behold. The railway runs higher up the side of the valley than the highway so you get a good view. 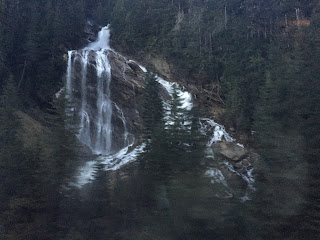 Many a waterfall along the tracks as well.